Who kicks your ass? - Razzmattazz !

For insiders of the scene, RAZZMATTAZZ ® have long been the new trademark for hard rock with kick-ass guarantee. The band is well on their way to establish themselves in the professional arena. Founded in 2011, the boys have so far excited fans predominantly in southern Germany and Switzerland. Their distinct sound, located somewhere between AC/DC, ZZTop and NWOBHM, fully satisfies the hard rock fan of every age group. Colorful and noisy action, the actual meaning of the band name Razzmattazz, are guaranteed.

After more than 200 gigs in every conceivable venue, Razzmattazz is ready for the next evolutionary progression; to tackle the domestic and international club and festival scene. This is a logical conclusion, as the band has won many awards, among them the Audience-Opening-Contest of the ROCK-OF-AGES-Festivals where the band performed with Krokus, Doro, Avantasia and others. The press was already in agreement: RAZZMATTAZZ: remember the name, buy the CD, attend the concerts.

Radio Hamburg became aware of the band in 2016 and engaged Razzmattazz to perform during the Motorcycle church service in Hamburg that year in front of 5,000 bikers. Opening for the Scottish rockers "Nazareth" during their 2016 and 2017 European Tour attracted thousands of enthusiastic new fans to Razzmattazz.  In fall 2018, they supported the cult metal band Axxis on their Monster Hero Tour. This generated numerous new and enthusiastic fans for Razzmattazz.

Four times number one -- “Best Hardrock Album”! The bands first three albums "Rock and Roll Hero" (2012), "Sons Of Guns" (2014) and "Diggin' For Gold" (2018), all won first place in the category "Best New Hard Rock Album" at the German Rock and Pop Awards. This was also achieved with their new album "Hallelujah". Four albums, four times winner--this had been never achieved before by any other artist in the 36 years history of the German Rock and Pop Awards.

The band also scored wins abroad. In March 2018 the band won the American AKADEMIA Award (Los Angeles) with "Diggin' For Gold" in the category "Best Hardrock Song". This resulted in over 120,000 airplays in radio stations worldwide.

The new album "Hallelujah" rocks from beginning to end. The energetic songs have hit qualities. The single "Cold Rain" is already playing on major radio stations. Another accolade for the band and their music.

Music journalists and the insider press had already attested after the previous album "Diggin' For Gold" that: "The boys now established their status in the professional arena."

With the new album "Hallelujah" this has now been cemented beyond doubt. Strong songs, strong live band. The national and international press are enthusiastic.

This sends a clear message to organizers: Book Razzmattazz! Period.

TOM SCHAUPP, Reutlingen, singer, guitarist, songwriter and band founder unites two things that are indispensable for the band: He sings the songs as relaxed and cool as he plays them. His unique timbre gives the band a quality that makes them recognizable. He always stays connected with the audience and is captivating. His sympathetic nature always includes a twinkle in his eye and leaves no room for boredom.

ULF S. GOKELER has been playing drums with  Razzmattazz since 2017. He previously performed on several international albums (like Sanvoisen, Das Scheit) and supported bands such as Uriah Heep, Deep Purple, and Saxon during several European tours. Musically diversified, he likes to play Progressive Metal as much as Blues. But his heart belongs to pure rock. Even without a diploma, he already worked at several municipal music schools and today works as a drum coach, textbook author and studio drummer.

On bass since April 2018: Peter Ucik (PU) - a low-tone driver of the old guard. At the age of 13 he already emulated his idols such as Cliff Williams of AC/DC or Tom Hamilton of Aeorosmith, whose down-to-earth style pulsates in his veins since then. Play simple and play well - this is his maxim. It has stayed with him during the course of his professional music career in many countries, on countless stages, and in almost all genres of music. PU brings the experience of over 2000 live performances to the band. He was on stage with opening acts for many well-known bands such as Uriah Heep, Manfred Man's Earth Band, Doro Pesch, Saxon, Spencer Davis Group, Scorpions, and others. He's an ass-kicking bass player with balls – returning to where he feels most comfortable; Rock'n'roll with Razzmattazz. Who kicks your ass? The bass of RAZZMATTAZZ

WOLFGANG "W" HEIECK, Heilbronn, guitar, lectured at the Modern Music School and supported Xavier Naidoo, Slade and other bands. For many years, he has been in demand as the guitarist for the winning choir of the SWR-Choir Duel 2013 "Open Doors" and performed on several of their CD and DVD projects. With them, he regularly plays with other major acts in the entertainment industry, among them the musicians of the Südwest-Rundfunk.

In addition to the musical excellence of the individual musicians, RAZZMATTAZZ distinguishes themselves and excels through the musical spectrum of their own compositions. They integrate the genres hard rock, rock, NWOBHM (New Wave of British Heavy Metal) and blues. All the while, the sound of the band is always driven by the rich, pumping groove of the rhythm section and the gripping, harmonious and catchy compositions of the likeable and captivating power quartet.

Gig offers and inquiries are happily answered by:

• Spring 2019: Numerous appearances throughout Germany, multiple radio and TV broadcasts by various stations. Worldwide recognition for the new album released in February and for the previous records. Networking with thousands of fans and followers on social networks. Video for the title song of the new CD reaches views in the 5-digit range within a short time after its release.

• December 2018: Celebrated opening act at the 10th Dynamite Night (Press coverage: ... one of the highlights right at the beginning ... )

• Performance from the main stage at the legendary motorcycle church service in Hamburg 2016 in front of 5,000 bikers

• Opening act at the Rock of Ages Festival 2013

• Song "Back To You" best hard rock song 2nd place

• Excellent press in industry magazines and online portals for all records 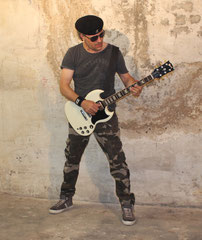 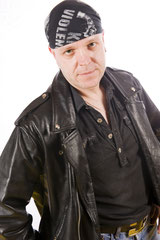 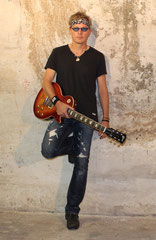 Tom Schaupp, singer, guitar player, song writer and founder of the band combines two things that are essential for the band: He’s singing the songs so easy-going and cool just like he’s playing them. His special voicing provides the band a special touch which makes them recognizable. Thereby he is always close to the audience, very catchy. His kind attitude comes with a twinkle in his eye and around him it never gets boring.

Ulf S. Gokeler is pounding on Razzmattazz’s drums since 2017. He released already many records world-wide (e.g. Sanvoisen, Das Scheit) and supported bands such as Uriah Heep, Deep Purple, Saxon. He did already several tours in Europe. Since he’s broadly diversified in music he loves playing metal as much as playing the blues. However his heart belongs to pure rock. Even without a diploma he worked at several public music schools and now as a drum-coach, teaching book author and studio drummer.

New on the bass since April 2018: Peter Ucik. A subwoofer of the old guard. Influenced by artists such as Cliff Williams from ACDC andTom Hamilton from Aerosmith since the age of 13, that deeply rooted passion forthe artistry has been pulsating through his veins ever since. His Motto "playsimple and play well" has carried his professional music career to manydifferent countries on countless stages, playing nearly all genres of music.Peter brings the expertise gained after participating in over 2,000 live shows,including opening for bands such as Uriah Heep, Manfred Mans Earth Band,Doro Pesch, Saxon, Spencer Davis, Scorpions and more. Heis a badass bassist with balls and once again exactly where he's always feltmeant to be- in the world of Rock'n'Roll. Who kicks your ass? The bass of RAZZMATTAZZ.

Wolfgang “Doubleyou” Heieck from Heilbronn, guitar, lecturer at the Modern Music School, supported Xavier Naidoo, Slade (amongs other). For many years now, he has also played the guitar for the award-winning choir of SWR- Chorduells 2013 “Open doors”. This gives him the chance to play with more well-known faces of the industry, e.g. with the the musicians of Südwest-Rundfunks (Southern-German radio station).  He supported “Open Doors” at record and video productions.

Besides the high musical skills of each musician, RAZZMATTAZZ are also characterised by the spectrum of their compositions. They provide you with the genres hardrock, rock, NWOBHM (new wave of British heavy metal) and blues. At the same time the band’s sound is always influenced by the deep, pumping groove of the rhythme group and the thrilling, harmonious and catchy compositions of the loveable power troop.

Summary of the greatest achievements so far

• December 2018: Celebrated opening act at the 10th Dynamite Night (Press coverage: ... one of the highlights right at the beginning ... )

• Performance from the main stage at the legendary motorcycle church service in Hamburg 2016 in front of 5,000 bikers

• Opening act at the Rock of Ages Festival 2013

• Song "Back To You" best hard rock song 2nd place

• Excellent press in industry magazines and online portals for all records